Has Your Small Business Just Made You a Hamster on a Wheel? 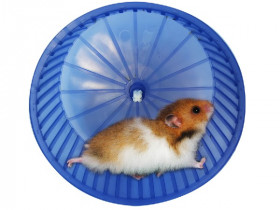 Wasn't this entrepreneur stuff supposed to be controlling your own destiny and riches beyond your wildest imagination?  Yet, as each day passes you feel like the proverbial hamster on a wheel?  You've seen them, turning that wheel by running as fast as they can. But the wheel is only going around and around, not forward. So many entrepreneurs find themselves in this position, especially after launch and an initial growth spurt that took them to a certain sales level, only to stay stagnated at plus or minus a couple of percent from that sales level for months or even years.

Suddenly, you wake up one day and you're still working extremely hard, but like the hamster, running as fast as you can...mostly in place! The interesting thing is that nearly every entrepreneur has a plan when they start out. Few ever update that plan. They just keep doing what they've been doing. A new week, month or year starts, they just jump back on that old wheel and start turning. When a business becomes "same stuff, different day," it is, at best, a study in frustration, and, at worst, a disaster waiting to happen. For an entrepreneurial business, the ability to react and change is at the foundation of success. You can't do that if you're "on the wheel."

Does this sound like you? If so, how do you stop being a hamster and get your business moving forward instead of running in place?

First, you have to come to grips with the fact that what you're doing isn't working.
What got you to whatever level you're stuck at, be it $200K, $500K, a $1 million or $5 million, won't get you to the next level. How you ran your business for the first six or twelve months won't necessarily get you the same results for the next six or twelve.Change should be a constant.

Second, you need to know what's not working and why, before you can fix it.
This means looking beyond your mirror. You have to be willing to listen to both criticism and new ideas, wherever they come from. If you've got any advisors, or a board, that might be a good place to start. What have they observed?  Can they help with an objective assessment? If you've got employees, talk to each them, either individually or as a group.  Ask each of them to tell you what's working and not working, what's contributing to forward progress and what's not, especially in their respective functions.  Encourage new ideas, whether that be for products or markets or, simply, how to better communicate.Talk to customers, especially, to the early ones, who have been with you for awhile. Solicit their input regarding how there might be issues with your product or service that you hadn't realized.Ask about support and response time to problems. Has communication slipped?

Third, you have to be willing to change; to shake things up a little bit.
This is often the most difficult for an entrepreneur, especially one who achieved early success. And, it means more than just re-assigning functions or re-arranging the office.It means taking to heart the input you've received (from advisors, employees and customers) and acting on it. It means encouraging change, not just for change's sake, but to continue to make your product and company better. It means putting together and following a new plan. But, like my advice to early stage companies, make it a "battle plan" that will be dynamic and a "living, breathing document," that changes as conditions change.

Change can re-invigorate you, your product and your company. Get off the wheel. Make change your partner and get on a new plan!

As an entrepreneur, have you ever felt like you were "on the wheel?" Include the story in your comments.It will help other entrepreneurs!