5 Critical Lessons Entrepreneurs Can Learn From a Market Leader's Rise and Fall. 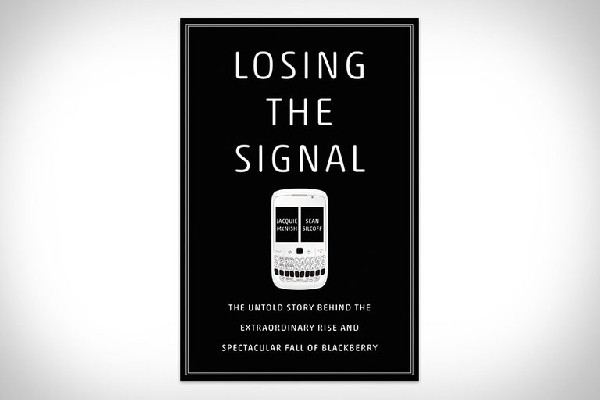 Phenomenal growth and market leadership always attracts a lot of attention and provides some great lessons for entrepreneurs.  More so, when that growth turns south and leadership turns into "also-ran."

I, recently, read "Losing the Signal," the story behind the tumultuous rise and fall of BlackBerry, written by Jacquie McNish and Sean Silcoff.  As much as anything, it's about the two distinctly different founders whose diversity was the reason for the company's rapid growth...and its nearly catastrophic decline. It reads like a good novel, with the initial astounding pace of innovation and the challenges and intrigue of managing and sustaining growth of a major technology breakthrough. As you all know, the company, originally known as Research in Motion (RIM), brought smartphones to business that forever changed the way we communicated. And, it was some ride, with some great lessons for entrepreneurs!

RIM went from less than $5 million in revenue in FY1995 (February 1995) to  $20 billion in FY2011, then back down to $3.3 billion in FY2015, while losing money in each of the last three years.  From that roller coaster ride, there are a myriad of lessons that can be learned by entrepreneurs.  Five in particular stand out as glaring sign posts to be heeded, if you want to increase the odds of your success, especially if you are in the technology arena:

This one is first because, it, ultimately, drove both the steep ascent and the rapid decline of BlackBerry.   Mike Lazardis, the co-founder responsible for the technology side of the business, believed that their technology was the absolute reason they were successful and rode that belief until it was too late.  The real reason was that their devices, while built on that technology, filled an unmet need - quicker, easier communication - the widespread use of texting/email. Once that need was matched by others it neutralized their technology play.

The Lesson: Technology, alone, never drives success. It has to be solving a customer problem or fulfilling a customer need. In short, it continually needs a business reason for its existence. Along the way, an extraordinary user interface, good marketing and quality delivery never hurt. But technology, alone, won't win the day. It needs a business partner!
Jim Balsillie, the other co-founder was a strong believer in "The Art of War"  by Sun Tzu, applying the principles of military strategy and tactics and the battlefield to all business situations.  Every meeting, every negotiation, especially, with strategic partners (telecom network providers like Verizon, AT&T, Sprint, etc.) was war and the other side was an adversary.  His objective was not just to win, but to conquer. So he hammered out tough terms with a "take no prisoners" approach. This came back and bit BlackBerry hard, later, when they really needed their partners' loyalty as they hit some tough times. But folks have long memories. Many partners left them at the earliest moment they could get out of their contracts.

The Lesson: "Win-win" should be objective of every negotiation. Neither side gets everything they want; but both sides get something they need. Remember your partner is running a business, too. "Win-win" may not get you everything you want, but you won't lose the war.
January 9, 2007 changed the technology and telecom markets, more dramatically than almost any other product innovation before or since, with the announcement of the iPhone.  It seemed to have caught Blackberry by surprise, but they just weren't paying attention.  Google had already been aggressively moving into the touchscreen market, having acquired Android in 2005 and striking a major deal with Samsung.  Just as Blackberry had earlier captured the corporate market, touchscreen smartphones did the same thing with the consumer market. And when did BlackBerry finally have a direct response to the iPhone and its touchscreen? 2012, and, initially, it failed miserably.

The Lesson: Track market and competitive information as closely you track your sales and your customers. Especially, look for new players who are outliers, today, and could be your biggest competitor tomorrow.
The co-founders continued to believe that they could return to their former glory if they just did the same things that made them successful the first time, a little better.  They didn't upgrade the basic software that drove their devices until 2011, even with the dramatic changes that had taken place with consumer use of smartphones from their heyday in the early 2000s until then.
The Lesson: There is no growth without change. While BlackBerry was an exception because of the enormity of their geographic market and how it slowly evolved, ultimately they paid the price. Certainly they grew, but the market caught up with them and then passed them. You have to constantly question how what you're doing could be done better...or somebody else will do it for you...with your customers. Just like with BlackBerry.
This ended up being the linchpin in BlackBerry's ultimate fall.  They had a board of "yes men (and women)" who had very little technology background and essentially brought nothing to the party when it came to providing a sounding board and good counsel.  They simply were friends of the co-founders and weren't equipped to be on the board of a high tech company, let alone a multi-billion dollar one.

The Lesson: Seek advisors who are knowledgeable about your type of business or your market, or, preferably both. Make sure they've been to the entrepreneurial dance before and can provide you both a sounding board and good advice based on their experience. And most of all, listen to them!
These five lessons are critical ones that can help entrepreneurs succeed. Hopefully, in the context of a company we all watched rise and fall, the lessons are emphasized. In closing, I'd like to quote the final two sentences of the book, because in them, the authors provide some key final lessons:

"In the technology sector failure is often a precondition to future successes, while prosperity can be the beginning of the end. If the rise and fall of BlackBerry teaches us anything, it is that the race for innovation has no finish line and that winners and losers can change places in an instant."

"The Entrepreneur's Yoda" knows these things.  He's been there.  May success be with you!

Have any of the lessons delivered here been relevant to your business?  Please share your thoughts in your comments.  It can help another entrepreneur.