Leadership: It's the Difference Between Success and Mediocrity in Business 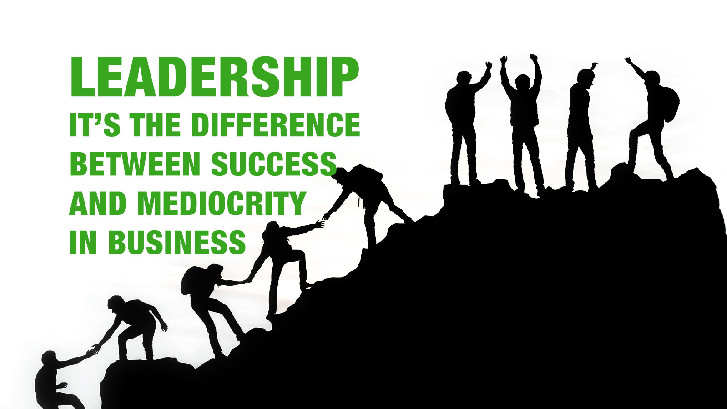 There are 2.5 billion results on Google just for the word “leadership.” Just about everybody has weighed in on it, in one way or another. So many definitions of leadership. But just what is it? And why is it so critical to business success?
John Quincy Adams, the sixth President of the United States, had a great definition of leadership – “If your actions inspire others to dream more, learn more, do more and become more, you are a leader.”  That’s a pretty lofty goal, but that’s what leadership is about…when it’s done right! It best describes what a true leader is.

There are natural leaders who were, seemingly, born with the ability to lead. And then there are leaders who have grown into great leaders based upon the examples of leaders they have worked for or skills they have honed or both.

At the end of the day, it’s about results.  It’s about making a vision happen.  And great leaders all have some critical leadership skills that really separate them from ordinary management:

1. Communication
This is listed first because everything else flows from it.  How you communicate with your employees, your customers, your suppliers, and even your investors, if you have any, will define your leadership.  And clarity and candor should define your communication. You say what you mean, and you mean what you say, no matter the message and to whom it’s directed.

3. Respect
This is about creating an environment of mutual trust and respect. And it starts right at the top and pervades the organization as “just the way we do business.”  My first job right out of college with IBM made a lasting impression on me regarding this skill, and I’ve carried it through the rest of my career.   IBM’s culture was and still is “respect for the individual,” and they lived it every day. It’s, basically, treating every team member in the business, and everyone you interact with outside the business, the way you want to be treated.  And haven’t we been taught that “Golden Rule” since we were kids?

4. Integrity
Integrity is about “what you stand for.”  In short, it’s about honesty.  It’s your character.  It’s the way you conduct your business. I wrote a whole blog post on this subject, several years back. In essence, as a leader, you are setting the example for the way team members should conduct themselves, internally and externally, as part of the company and the way the business is viewed by customers, suppliers, and your market.

5. Courage
Courage is about making the tough decisions when necessary, knowing that the result may not be the optimum, but the one that’s required at the time, whether that’s with employees, customers, or suppliers. It’s about not being afraid to take prudent risks, and sometimes, maybe not-so prudent when either there’s an opportunity that they may not come along again or when there could be a worse outcome down the road. And it is sometimes just using “gut feeling” because that is what good leaders do!

6. Delegation
Delegation isn’t just getting things off of your plate.  It’s about establishing accountability by giving people the authority that goes with the responsibilities they have.  It’s about creating a management team with whom you can grow your company.  It’s pushing decision-making down the line. And what it’s not about is micromanaging.  It’s about allowing people to fail and making that failure a teachable moment. And finally, it’s about creating new leaders through that process.

Great leadership is not easy.   While it’s pretty subjective, having been there, I can assure you that if you can follow or develop the 6 critical skills that we just addressed, you almost can’t fail as a good leader…maybe even be a great one!

“The Entrepreneur’s Yoda” knows these things.  He’s been there.  May success be with you!