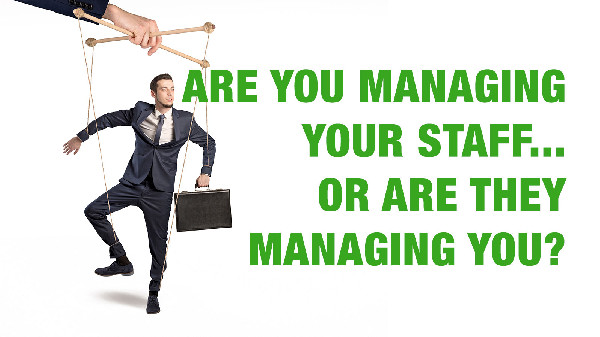 As the owner of your business, do a majority of the problems or issues, either in your organization or with customers, seem to end up on your desk?

In a recent review meeting with a client, one of the principals was just really upset. It seems that he was spending a lot of his time dealing with problems and issues that his staff brought to him that he felt they should have been addressing.   Does this sound familiar to you?   Well, it seems that his staff had learned how to "manage up."

How does this happen?

Well, you let it.  And how do you do that? Like a doting parent (or worse, a micro-manager), you want to do things "your way," so you show them how you want certain problems or issues dealt with. That's cool, the first or second time they face them.  But, if after a bit, you just keep solving the problem or dealing with the issue for them, you've created a situation where they are managing you instead of the other way around.

And how do you avoid this? Well, here are five tips that can help you avoid being managed by your team… rather than the other way around:

No Public Floggings
Often, without being aware of it, small business owners create an environment where they inhibit or almost prohibit employee decision-making, and blame is more important than ultimate success. By not encouraging or allowing employees to make decisions (you make them, instead). By berating (often publicly) mistakes, or worst of all, firing employees who make a serious mistake, maybe even one that costs the company money. This last one is especially troubling because it is typically made in anger, and it fosters a "blame game" mentality in the company.

Ask Them How They Would Solve the Problem
When they bring a problem to you, give it right back to them by asking them, "how would you solve the problem?" And, if they don't have an answer, tell them to think about and bring you a solution they believe would address the problem. If and when they have an answer, talk about it and agree on what they would do, and tell them that it's theirs to execute.

Encourage Risk-Taking and "Out of the Box" Thinking
Allowing employees to fail is way different than encouraging them to fail. You want them to make good decisions, and you want them to take some risks, especially "thinking outside the box," for solutions that may not be what your business or you might normally do. And you want them to learn from their mistakes. More importantly, you want them to take responsibility for their job and their decisions. And above all, give them the authority to make that happen.

Make Them Part of the Decision-Making Process Wherever Possible
As they learn from their mistakes, they become more confident and stronger in their decision-making, and the company benefits from having employees who are both accountable and growing every day. And you, as the small business owner, have people you can count on. When that happens, bring them into the decision-making process.  Maybe put them on the project team selecting new office space or bringing in new software.  It will solidify that you are confident in them and their decision-making ability.

Celebrate Small Victories of Successful Staff Initiatives
I've used this several times before, but in this case, it has to do with encouraging initiative.  If a staff member brings a really good idea to the table that either brings in new revenue, reduces current or saves future costs, regardless of the scope, make that a point for celebration.  Maybe it becomes part of the corporate culture, with monthly awards for the best "whatever." But it encourages risk-taking, "thinking outside the box," and becoming part of the solution rather than just identifying problems.

So, the upshot of this is that instead of them managing up, you're managing down and allowing them to grow as solid staff members and solid contributors to the business' top-line, bottom-line, and culture. Plus, it will help you avoid a lot of daytime aggravation and some sleepless nights for you as the business owner.