Free Advice Is Usually Worth What You Pay For It! 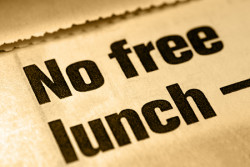 Some time ago, a question was raised in one of the discussion groups on LinkedIn about the value of mentoring as one of the most critical elements in contributing to the success of small business owners.

Mentoring is one of the most critical elements in contributing to the success of small business owners. It helps entrepreneurs to avoid the pitfalls and mistakes that the advisor/mentor has made in their own careers. It further provides objectivity in assisting the small business owner with key decision-making and should help provide a "sounding board" and even a basis for new ideas for the business' success. Moreover, it provides a factor of accountability that the entrepreneur only gets, otherwise, from the mirror.

Having started and sold multiple businesses and been a CEO for more than 30 years across different industries, I have advised or mentored many entrepreneurs and future business owners. However, by and large, I realized what I was doing wasn't working either for me or the entrepreneur. I have painfully learned and firmly believe that, most often, "free advice is worth what you pay for it." I used to give free advice, freely. Consequently, I was continually frustrated by providing guidance and observations that, ultimately, were ignored and watched the entrepreneur make the mistake(s) that I warned were going to be the outcome of their direction or decision. Further, it wasted both of our times, without any good result.

Now, by and large, I mostly provide the same good advice for a fee, to a decidedly smaller group of businesses. But they listen, because they are paying for it, not outrageously, but enough that they think twice before engaging my efforts and then not paying attention to the advice. That's what makes this kind of advising work for both sides. "Win, win."

Selectively, I still mentor raw startups, pro bono, who have limited capital but a deep passion for a business model that I believe can succeed. For them, I have set three rules. First, my time, like theirs is valuable, use it with discretion. Second, some day they may be able to afford me, but for now not to worry about paying. But at some point in the future, do this for someone else...in essence, "pay it forward." And finally, listen. They don't have to accept my advice, blindly, but, at least, consider it. Again, a "win, win."

In either case, there is a price and there is a return. Value for value.

However, regardless of whether it's for fee or for free, the essence of successful mentoring relationship is that it have some agreed upon objectives over some finite time horizon. And that it be judged, on both sides, by the results against those objectives. This forces accountability on the small business owner and dedication on the part of the mentor/advisor.

Master Yoda knows these things. His job it is. May success be with you!