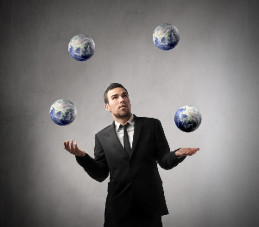 Jugglers have always fascinated me. Not the guys who can juggle three bowling balls or flaming torches, but those ones who can juggle five, six disparate things (usually relatively modest-sized) and keep them all in the air, without one falling to the ground. And how exciting would that same situation be if the juggler was doing it with one ball?

As a lifelong entrepreneur, I think my fascination was borne of identifying with a "kindred spirit." Because nowhere is keeping a number of objects 'in the air' more prevalent (or necessary) than in a small business. The further you move in the life cycle of a small business, the more balls you have to learn to juggle. And just like with the juggler, if all you can juggle is one ball (that is, one task at a time), it's not only not very exciting, but is a recipe for disaster with your business. Juggling multiple tasks is a skill you have to learn in order for your small business to succeed and it's something few are ever ready for.

As with jugglers, some folks come naturally at being able to do this, but for most of us, it is an acquired (and necessary) habit. But unlike with jugglers, where there are actually people you can go to or classes you can attend to learn this skill, there really is no guidance for entrepreneurs.

So, for those of you, "multi-tasked challenged," let me offer some guidance. Here are four critical indicators of that you might be a "one ball juggler" and the steps to take toward become an accomplished "small business juggler."

Can't Focus on More than One Thing at a Time
Everybody preaches focus to the entrepreneur, but it can be taken to an extreme. When you first start a business, it's obvious that there is much to be done. But, typically, that can be done, serially, without the need for multi-tasking. Once you get rolling, you cannot succeed being focused on one thing at a time. There's just too much to be done. So you need to move out of your comfort zone and get at least a second ball in the air. Maybe it's not just concentrating on delivering this current project to your major customer, but also working on a marketing program to increase awareness for future prospects.

Can't Prioritize
Then, with a little success, it becomes a lot more complicated, with the entrepreneur being pulled in multiple directions by the needs of prospects, customers, vendors and employees. Plus, there's that dance recital that your daughter is in and that anniversary that's coming up. But not everything can be a number one priority. Nothing is more stressful or less productive than trying to make it all happen at once. Determine the top 3 (or 5 if you become really skillful at it) things that need to get done at any one time and let those be the tasks you juggle. The others simply get tabled until those get done. Then you add another as you complete one.

Can't Delegate/Don't Train Others
Once you have employees, even one, you need to learn to delegate some of the lesser tasks to them. Too many entrepreneurs, having had to do every single task, every single time, end up not able to break this habit. So when the priority tasks that need to be done multiply, the small business owner is overwhelmed, trying to do everything alone. Even if you believe that the only way for something to get done right is to do it yourself, once you have employees, you need to train them to take on some of your responsibility.

Don't Have "Business Peripheral Vision"
Ever watch a juggler's eyes? They're looking at the objects in the air, using their peripheral vision. You have to do the same thing with your business. You have to be aware of all the things going on around you that might affect key priority tasks, both those you are trying to accomplish and those you have delegated. For example, getting that proposal done and out, on time, will also require that you understand what peripheral tasks might impact that, like the logistics for printing, binding and making sure you make the FedEx deadline. Or, that your son's little league championship game is the day before and may require further schedule juggling to address both priorities. "Business peripheral vision" helps you keep all your tasks both in, perspective, as well as to understand which one or ones are the most complicated and bear extra concentration.

Don't be a "one ball juggler." It takes some careful awareness of the critical indicators and the ability to overcome them to "keep all the balls in the air," to succeed.