The Culture You Create Is the Soul of Your Enterprise! 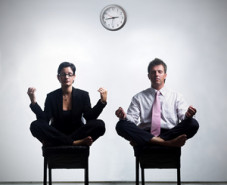 When an entrepreneur starts a business, probably the last thing they think about is the culture they are going to create within it. Yet, it is probably the most powerful force that, later, drives the company forward...or not.

The business concept, the underlying technology, the great idea are usually what becomes the underpinning foundation that births the business. But, once all this migrates from the founder(s) to its first employee(s) is truly when it becomes a business...and when the actual DNA of the business is established. Its soul!

As I've noted in other postings, we are a product of our environment. As our parents raised us is often how we establish how we live our lives, raise our children. Just as often, our early jobs set the stage for how we behave in business. We, often, manage as we were managed. And with the way companies churn through people and the way B-schools continue their heavy focus on process rather than combination of process and intuition, we are ending up with more and more managers who feel that people are a necessary evil to a business. Mere cogs in the machine! And that often gets translated to a bad end, when these same managers endeavor to become entrepreneurs.

I'll never forget my first entrepreneurial or, I guess before it became fashionable, "intrapreneurial" business. I was barely 27 years old and running an IT company that I had started for a major conglomerate. One day, early on, it dawned on me, that every major decision I made was setting policy for the company, Every action I was taking was being viewed by the employees as the way we should behave as an organization. I was, literally crafting a culture. Only years later, when I started my first business with my own money, did I really understand that I had the opportunity to create a company that not only made money, but stood for something. My values.

And this what every entrepreneur faces at some point in time or another. They are creating the culture of their business with every decision they make, every day that they are in business. They are setting the tone for the values the company will espouse. But just as often, they are ill-prepared from an experiential viewpoint to create an environment that is conducive to personal and professional growth for its people, which ALWAYS translates into growth for the company. The biggest result of how you treat your people will be reflected in how your people treat your customers. If they're working in a setting where it's fun to work, they are respected, trusted and challenged and made to feel proud to be a part of it, your customers will see that in every interaction. And the company will thrive. Unfortunately, the opposite is also true, however, the company usually doesn't see it until it's too late and it's heading south.

The culture of your enterprise can simply happen as the result of how the business evolves or you can be proactive in crafting it. Look at it as the "soul" of your enterprise. It should reflect the values of the owner(s) and/or the vision of the kind of company the owner(s) want to create. Like most things, there are no right answers for what that should be, but here are some thoughts.

If you haven't had good example of a company you admire in your past, find a model you like. I was fortunate. In my first job, I worked for IBM, back in the day when their guiding principle was "respect for the individual." It was hugely paternalistic organization with well stated and well practiced values and the employee loyalty that the company engendered was incredible. That made such an impression on me, that it drove the way decisions were made and employees managed for years after. Unfortunately, not everyone starts out with that kind of good base. But there are plenty good examples out there. Read about good companies, good models. But don't just copy one. What works for one company won't necessarily work for another. Think about the environment you want to create for you and your people. Pick and choose what works for you.

A couple of key things you should think about.

Build your company on a foundation of trust and mutual respect, where teamwork is encouraged over individual endeavors. Make it a fun place to work. Now that doesn't mean you have to have a foosball table in the middle of the office or Friday afternoon beer parties, but it does mean that you keep humor and levity as part of the fabric of the company, challenge your people to grow and create opportunities for socializing with peers. Hold people accountable. Make them responsible for their actions. Allow them take risks, but don't fire them if they fail. Mixed message! And above all, keep communicating. Keep them informed...of progress, or even the lack of it. If they feel part of the team, they will have your back in tough times. Finally, make them a part of ownership of the company, wherever possible. Using stock options as a way to incentivize employees and create more a feeling of participation can increase employee pride (this is MY company) and increase the company's value, because everybody is working toward the same end.

These are just some ideas. However, whatever you create, write it down, make it something employees can carry around with them, have it at their desk, or even give to customers, so everybody knows what the company stands for. I ran a major division for a public company, years back, that had a mantra of "hustle," even a poem written by the CEO. Yeah, a little hokey, but we all carried these plastic cards, that not only had the poem on one side, but on the other side our mission and key objectives - which really defined our values. You know, that culture was so embedded in me, that twenty plus years later, I still carry that card!

The culture of a company is its soul. Create and develop it wisely. It will pay extraordinary dividends.

Master Yoda knows these things. His job it is. May success be with you!