Do You Allow Your Employees to Fail? 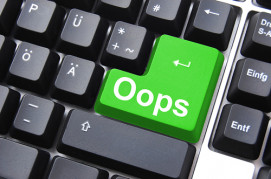 Once, long ago, I was being interviewed for a position to run a division of one of the few large companies I ever worked for. As the interview was coming to a close, the Chairman/CEO, who I had known for years, asked me if I had any questions. I said I just had one. "Do you allow your employees to fail?" He looked at me like I had two heads and said, "Excuse, me, I'm not sure I understand your question." I explained that what I meant was if an employee made a bad decision (big or small), was he/she fired? Because, if that was the case, he should simply fire me, right then, because I made a lot of bad decisions. I, further, explained that in the position that I was taking on, I would be making, potentially, hundreds of decisions every week, but that I would, invariably, make some of those wrong. But, I was not afraid to either make them, or to be held accountable for them. But I was not "mistake-proof." Nor are any of your employees.

Often, without being aware of it, small business owners create an environment where they inhibit or almost prohibit employee decision-making and blame is more important than ultimate success.

By not encouraging or allowing employees to make decisions (you make them instead); by berating (often publicly) mistakes, and worst of all, firing employees who make a serious mistake, maybe even one that costs the company money. This last one is especially troubling because it is, typically, made in anger, and it fosters a "blame game" mentality in the company.

And how do you this?

By holding them accountable. And how do you hold them accountable? You give them the authority to make decisions related to their job responsibility. And you make sure that when they do make a bad decision or a mistake, it is dealt with as a way to learn and grow. The most important lesson delivered should be - learn, grow, don't make this one again...most important, move on. Even, if the mistake costs the company money.

Allowing employees to fail means encouraging employees to make decisions, holding them accountable, but understanding that we are all human and will make mistakes. As they learn from their mistakes, they become more confident and stronger in their decision-making, and the company benefits from having employees who are both accountable and growing, every day. And you, as the small business owner, have people you can count on.